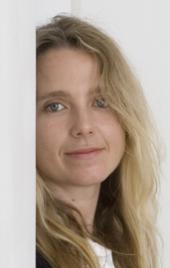 On her work and her experience as a Humanities major: Film is a medium that invites a world of conflicting emotions and ideas to resonate, to perform, to hesitate, merge, and part. Like pretend lovers on a stage, the elements that make up a film—actors, costumes, lighting, sets, sound, music, camerawork, editing—play out a scene of seduction and withdrawal, accord and tension. Film attracts and holds—then releases—whatever it is given. Its transformed beam of light is like a psychological projection, harboring as many possibilities as viewers in the room.

I came to film as a medium because of its open potential: the chance to travel through space and time within an imagined world. My films have allowed me to journey through assembled impulses, investigations, memories, reveries, scholarly research, and grabbed citations. This chosen medium offers the possibility of creating a fragmented totality.

As “total artworks,” my films require profoundly interdisciplinary research. I work with dancers, musicians, filmmakers, fashion designers, and pull from historical, art historical and literary research; all of these interests and skills were stimulated and strengthened by the Humanities major.