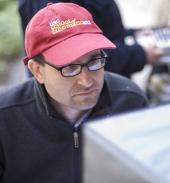 After the Humanities major (and before that, Directed Studies), Christopher moved to New York, where he was a consultant in new media. Deciding to pursue his passion to become a filmmaker, he received his MFA from the University of Southern California School of Cinema-Television and won a student Academy Award for his short film Mr. October. He has gone on to direct five feature films. This Is Not a Test, his first as both writer and director, was released on January 20, 2009, and is a satire about a man who becomes overly afraid that terrorists might attack Los Angeles. Christopher was also nominated for an Emmy for his work as the editor of James Cameron’s Expedition: Bismarck.

On the Humanities major: I could not imagine a better grounding for any filmmaker than the Humanities major. The interdisciplinary approach of the major allowed me to focus on narrative storytelling and the history of ideas, as well as on art history, and the history of aesthetics. As a writer, director, and editor of film, I still apply that interdisciplinary approach on a daily basis, approaching a project both from the point of view of a storyteller and as a visual artist. At Yale, as the Humanities major’s courses moved into the modernism period, I was able to make film and its relation to literature the focus of my studies. But the grounding in literature, philosophy, history, and art history from the entire course of study still serves as an inspiration and model for much of the work I seek to do today.