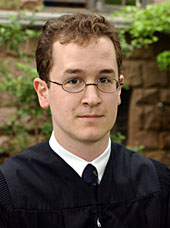 After leaving Yale, Wallace spent a year in Japan on a Light Fellowship.When he returned, he entered Harvard Law School. Taking a year’s leave of absence, he spent this past year at King’s College, Cambridge in order to take an MPhil in Oriental Studies. He is now back at Harvard to finish up his last two years of law school. When he graduates, he plans to work for the law firm Davis Polk & Wardwell, likely in their Tokyo, Hong Kong, or Beijing office.

On the Humanities major: While a major like Humanities of course does not confer the practical skills necessary for capital markets law, it does confer a feeling of intellectual confidence that is extraordinarily useful to a law student. Harvard Law is a rather intense place, but in my experience, people who have been through Directed Studies or the Humanities major are well-positioned to think and write carefully, which are the requisite abilities of a good lawyer.

I liked the fact that we were a sort of elite within Yale, permitted to take courses where and when we liked, with professors of our choosing. I combined Humanities with International Studies—which was also very flexible when I was there—and would not change a thing, even if I were given the chance. I do not think I have a single friend who was exposed to the breadth and depth of the Yale faculty in the way that I was. I am a big fan of the program.