The Politics of Resentment: Screening 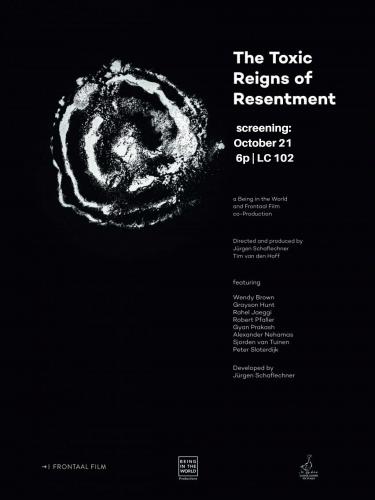 A screening of the film, “The Toxic Reigns of Resentment,” with Jürgen Schaflechner and Sjoerd van Tuinen.

The Film: After the fall of the Soviet empire and the triumph of global capitalism, modernity appeared to keep its dual promise of liberty and equality. The spreading of human rights and democratic forms of government were intrinsically linked to free flows of global capital and free markets. Supported by technological developments and an ever-increasing digitalization of daily life, the future contained the promise of abundance and recognition for all. Only a few decades later, however, we witness an oppositional trend: A revival of nationalism paired with xenophobia, an increasing tribalization of politics, a public sphere oscillating between cruelty and sentimentality, and a Left caught up in wounded attachments. Social media, once the promise to give voice to the disempowered, link cognitive capitalism with a culture of trolling and hyper moralization. Algorithms programmed to monetarize outrage feed isolated information bubbles and produce what many call the era of post-truth politics.

How did we enter this toxic climate? Are these developments a response to the ubiquity of neoliberal market structures eroding the basic solidarities in our society? Has the spread of social media limited our ability to soberly deal with conflicting life worlds? And have both the left and the right given in to a form of politics where moralization and cynical mockery outdo collective visions of the future?

Jürgen Schaflechner is Assistant Professor at the Department of Modern South Asian Languages and Literatures, South Asia Institute, University of Heidelberg. His research and teaching include cultural and post-colonial theory, the religious and ethnic minorities in the Islamic Republic of Pakistan, and the role of documentary film in anthropological research.  Jürgen has filmed, edited and produced six ethnological documentary films. In 2017-18 he researched the culture and politics of resentment as a fellow at the Princeton Institute for International and Regional Studies.  (www.juergen-schaflechner.com). He is currently a Martin Buber fellow at the Hebrew University.

Sjoerd van Tuinen is Associate Professor of Philosophy at Erasmus University Rotterdam and co-founder of the Erasmus Institute for Public Knowledge. After his PhD (Ghent 2009) on Leibniz and Deleuze, he has had visiting affiliations with universities in London, Berlin, Vienna, New York and Princeton. Driven by transdisciplinary affinities across the arts and humanities, van Tuinen publishes on ecophilosophy, metaphysics, aesthetics and the history of contemporary Continental philosophy. He authored Peter Sloterdijk. Ein Profil (Fink, 2006) and is editor of over a dozen books, including Deleuze and The Fold. A Critical Reader (Palgrave Macmillan, 2010), Speculative Art Histories (Edinburgh University Press, 2017), Art History after Deleuze and Guattari (Leuven UP, 2017), The Polemics of Ressentiment. Variations on Nietzsche (Bloomsbury, 2018) and a series of theory books with V2_Institute for Unstable Media (Rotterdam). His current project is to finish a monograph entitled ‘Ressentiment. Pedagogy of a Concept’.