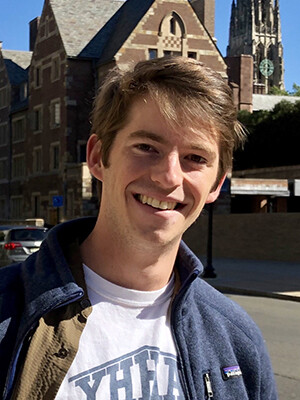 Jackson Willis (HUMS ‘20) was one of three Yalies and 32 students in the United States to win the Rhodes Scholarship in 2020. On campus, Willis participated in Directed Studies and the Brady-Johnson Program in Grand Strategy, a year-long course that addresses large-scale, long-term strategic challenges of statecraft, politics, and social change. He served as chair and a volunteer for the Yale Hunger and Homeless Action Project and was on the Dwight Hall board of directors. He was a student curator and gallery guide at the Yale Center for British Art. He previously worked for the Ramsar Convention as a Robin Berlin Fellow and in the Yale Investments Office, as well as for the Dali Museum on a U.S.-Cuba art exchange. He has also created public murals in his hometown of St. Petersburg, Florida. Willis took a one-year leave while at Yale to join the Peace Corps and the NGO Osez Innover in Guinea, working to improve youth employment outcomes. He will pursue Master of Science degrees in economics for development and in global governance and diplomacy at Oxford.

He was one of only two seniors to graduate last year with Exceptional Distinction.