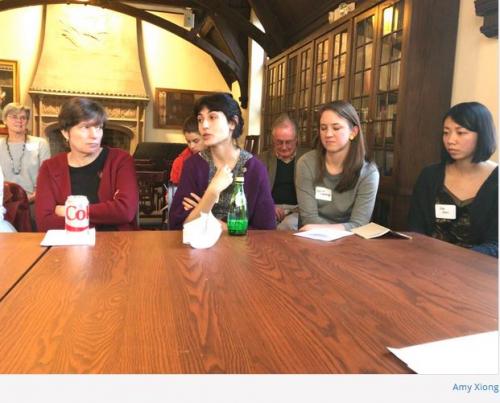 Yale’s Humanities Program hosted a “Humanities in Medicine” workshop on Sunday afternoon, bringing together Yale students and alumni to discuss how the study of humanities can inform and enrich careers in medicine.

At the workshop, 11 alumni from Yale College and four of Yale’s graduate schools shared with attendees how their humanities backgrounds have shaped their career paths. Over 60 members of the Yale community attended the forum at the Whitney Humanities Center, which consisted of a panel, a series of breakout sessions and a networking reception.

“The humanities really train doctors to see more than meets the eye,” Dean of Yale College Marvin Chun said in his opening remarks at the event. “The field offers medicine the art of observation and the ability to see detail.”

Now in its fourth year, the annual workshop — previously known as “Humanities in Action” — features people who majored in the humanities and have ended up in a variety of professions, according to Norma Thompson, the director of undergraduate studies for the humanities major and an organizer of the event. This year, the program was inspired by the School of Medicine’s Program for Humanities in Medicine to highlight the medical profession in particular.

Sunday’s workshop began with a panel of five recent alumni in the health care field who shared their experiences integrating the humanities with medicine. Ranging from current medical students to practicing physicians and nurses, the speakers explained how their backgrounds in areas such as history and religion have helped them navigate the field of medicine.

Virginia Waldrop ’12, a medical student at the University of Texas at Austin Dell Medical School, said studying humanities at Yale helped her adopt a framework different from others’ at the hospital and connect with local communities she serves.

Brian Boyle ’10, a psychiatry resident at Massachusetts General Hospital, explained that a humanities education fosters critical thinking, interpretation and storytelling skills, as well as a willingness to deal with incomplete information — tools he said are valuable in medical practice.

“Humanities helps you to develop the deep respect and appreciation for theoretical frameworks and approaches to problems as opposed to simply the acquisition of subject matter, facts and knowledge,” Boyle said. “You can then fill in the gaps when you’re missing the knowledge.”

Several of the panelists also noted that their humanistic studies have helped them empathize with their patients. Isobel Rosenthal ’12, a medical student at Icahn School of Medicine at Mount Sinai, said her background has framed the way she approaches her patients by pushing her to focus on their priorities and goals.

Following the panel, attendees broke into three smaller sessions, focused on the School of Medicine, School of Nursing and School of Public Health, depending on their specific interests. The five panelists, joined by older Yale alumni, led these sessions, detailing their career paths and offering advice to the attendees.

As an event geared toward undergraduates — particularly first years and sophomores, according to Thompson — the workshop centered on the concerns of students who are beginning their medical careers. For example, the physician-oriented breakout session focused on the value of gap years between undergraduate and professional education and on how to continue studies in humanities after entering medical school — two common concerns from students who attended the workshop.

“It’s nice to have reassurance from people in the medical field who studied subjects other than science that it’s OK to want to study humanities and still go to medical school,” attendee Madison Mahoney ’20 said.

Mahoney added that the event also helped her identify faculty members at Yale who are specifically involved with the intersection of the humanities and medicine.

Jessica Pevner ’21 said that attending the workshop has broadened her perspective on the value of humanities skills, including observation and analysis, in medicine.

“It’s great that the Humanities Program has embraced this kind of service for students,” said workshop speaker Andrew Lipka ’78, an ophthalmologist and fellow of Jonathan Edwards College. “I believe that the humanities are the best preparation for a career in medicine.”

In addition to offering the humanities major, the Humanities Program runs Directed Studies, an interdisciplinary humanities program for first years.