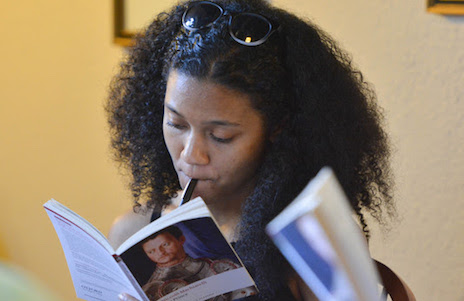 “Damn straight!” exclaimed Garsten, slamming his fist on the table. Startled, his young students glanced around at each other, then burst into laughter at this uncharacteristically spirited response from their normally soft-spoken professor.

For the previous 45 minutes, Garsten had led 12 teenagers through a discussion of literary giants that jumped from modern poet Gwendolyn Brooks back to the ancient Greek statesman Pericles, then forward once more to 19th-century philosopher Henry David Thoreau. Throughout the discussion, the students reflected on what it meant to be thoughtful and active participants in societies — in general and specifically in their hometown, New Haven.

It was Garsten’s last seminar with these students, the inaugural class for his new summer program, “Citizens, Thinkers, Writers: Reflecting on Civic Life.” The tuition-free program introduced 12 rising seniors from seven New Haven public schools to the intensive study that is characteristic of the college experience. Students were selected for their intellectual curiosity and love of reading based on recommendations from their English and social studies teachers, principals, and librarians. They lived in Timothy Dwight College for two weeks while reading, discussing, and writing about a variety of western canonical texts on civic life under humanities professors Garsten and Kathryn Slanski. Additionally, they were mentored by undergraduates Sophie Dillon ’17 and Denzell Jobson ’17, while Stephanie Almeida, a Ph.D. student in political science, served as the program coordinator.

“We wanted to make them feel a strong sense of agency about both their education and their city,” said Garsten, professor of political science and humanities, chair of the Humanities Program, and founder of “Citizens.”

“Study of the humanities invites us — forces us — to learn how to confront and respond to challenging and complicated questions about being human,” said Slanski. “We were determined to include the voices of the students in these conversations.”

Creating community ties: Garsten, a native of the southern Connecticut area, developed the program after learning of a similar effort at Columbia University. He liked the mission of making humanities relevant to citizenship and civic themes and the “insistence that these canonical texts are relevant to all of us.” Wanting to engage the New Haven community along these same lines, he recruited Almeida and Slanski and sought consultation from Yale’s Office of New Haven and State Affairs and the director of the education studies program.

“Sometimes when you’re at universities like Yale, you fall into thinking of your community as the global elite circulating through the big cities and big universities. But we live here in a particular city, and we should try to work with people in this city,” Garsten said, emphasizing that the creation of links between Yale’s Humanities Program and the city of New Haven is a fundamental part of the “Citizens” program.

In that vein, the students heard from people and visited sites in New Haven that offered examples of civic engagement. A special guest from the community spoke with the group each afternoon, and the students visited the Yale University Art Gallery, the Connecticut Center for Arts and Technology, and other institutions that serve New Haven. One of the more memorable meetings, said the students, was with New Haven’s chief of police, Dean Esserman. Because it took place shortly after a series of police shootings of African-American men and civilian shootings of police rocked the country, the meeting was both deep and illuminating for the young students.

“I thought it was pretty cool because we got this different perspective from the chief,” Harrison said of the conversation. “We got to say how we felt about police brutality and all that, and then the chief came in and asked us if we ever thought about the kids of the officers who were killed. What would we say to them? So we got [both] what we thought and also what the chief thought.”

Coincidentally, when explaining one of his points, Esserman referenced a line from the play “Antigone” by ancient Greek philosopher Sophocles, which the students had read earlier in the program. “He is a no-nonsense, practical person,” said Garsten of the chief, “so for the kids to see that even someone like that reaches for these poetic lines when trying to think about something was a great example.”

“It was really cool that we got to talk to the chief about policing and how it works and how they want to work on community policing, and also how it ties into the readings that we’ve done in seminars,” said Vincent Ciacciarella, a senior at Cooperative Arts and Humanities High School (The Co-op).

A strong start: Despite being new and competing with many summer programs offered at Yale, “Citizens” has been a success, said both Garsten and Slanski.

“[We tried] to give them — in only two weeks — a worthwhile experience studying the humanities,” Slanski said. “All of the students got a taste of how challenging and consequently rewarding intensive reading, writing, and seminar-based study of the humanities can be.”

“You look in [the students’] eyes to see if they seem engaged, and they are,” Garsten said, noting that he had been concerned that the intense pace and long days might overwhelm high school students.

The students acknowledged the program’s intensity, but praised it for exercising and improving their intellectual skills. “This was like AP AP AP class,” said Ashaliegh Carrington, a student at the Co-op, comparing “Citizens” to the Advanced Placement classes offered at high schools. Speaking about the program’s writing component, Destiny Jones, a student at High School in the Community, said, “The essay was pretty short, but the content was so intense.”

Malachi Bridges, senior at Metropolitan Business Academy, said the program had improved his skills as a critical thinker, debater, and writer: “I learned how to find depth in anything … and to take two sides of an argument and defend both, even though it may not be my personal view or opinion.”

“[Garsten] always makes us take the other side of every argument, which can be annoying, but also is really good for finding the flaws of what we think and seeing the truth of the other side,” added Allegra Ranelli, senior at Wilbur Cross High School.

The students credit their professors and mentors for their engagement in the program. The bond formed between the teenagers and the program staff is clear – Garsten immediately received a compliment on his haircut when he entered the room, and the students affectionately refer to Almeida as “Mama Steph.” When they discovered that their undergraduate mentor, Dillon, has had an essay published in the New York Times, they erupted into cheers and jeers both supportive of her success and indignant that she hadn’t told them, and immediately searched for it on their phones.

“They’re all just awesome — really inspiring,” said Tiana Hill, a student at the Co-op, of the program staff.

For their part, the professors were impressed at the unique ways with which the students approached the texts. Garsten noted with pride that the teenagers’ reactions to some of the texts were markedly different from those he usually sees in undergraduate courses. Slanski expressed admiration for the students’ passionate engagement with W.E.B. DuBois’ “The Souls of Black Folk” – “they connected his work so eloquently and convincingly with their own lived experiences of American racism,” she said.

Bright futures: Garsten started the last seminar with a discussion of the poem “Kitchenette Building” by Gwendolyn Brooks, the first African-American woman to win the Pulitzer Prize. As the students discussed the poem’s tension between dreams and the needs of reality, Garsten asked if they know anyone who is resigned to not dreaming about that which seems out of reach. “Oh yeah,” they responded. “It’s sad,” said Ciacciarella.

Though the residential part of the program ended on July 22, the students will receive guidance from their undergraduate mentors Dillon and Jobson as they navigate the college application process this coming school year. Half the students will be the first in their families to earn a degree from a four-year college.

Yale’s Office of New Haven and State Affairs and Elizabeth Carroll, director of Yale’s education studies program, gave consultation for the development of the program.