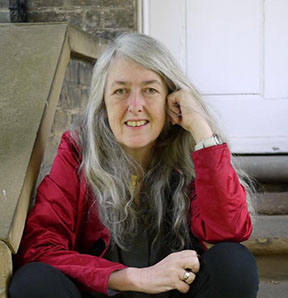 Mary Beard, one of Britain’s best-known classicists, will present the ninth annual Rostovtzeff Lecture at 5:30 p.m. on Thursday, Nov. 10 in Rm. 102 of Linsly-Chittenden Hall, 63 High St.

Her talk, “The 12 Caesars: Fictions and Fakes, Meanings and Misunderstandings from the Renaissance to Now,” is free and open to the public.

There will be a symposium on Beard’s talk on the following day, Friday, Nov. 11, from 9 a.m. until noon, in Phelps Hall, 344 College St. Speakers include Michael Koortbojian (Princeton), Paula E. Findlen (Stanford), Stephen Campbell (Johns Hopkins), Patricia Rubin (New York University), and Noel Lenski (Yale). This event is also free and open to the public.

Beard will also present a lecture to more than 120 undergraduates in the Directed Studies program at the Class of 1937 Colloquium on Friday, and accompany a group of Directed Studies students to view rare materials in the Beinecke Rare Book and Manuscript Library.

Beard is a professor of classics at the University of Cambridge and a fellow of Newnham College, where she has taught for the last 30 years. She has written numerous books on the ancient world, including the 2008 Wolfson Prize-winner, “Pompeii: The Life of a Roman Town,” which portrays life in Pompeii in all its aspects, from food to sex to politics. Previous books include “The Roman Triumph, Classical Art from Greece to Rome” and books on the Parthenon and the Colosseum. Her interests range from the social and cultural life of ancient Greece and Rome to the Victorian understanding of antiquity. Her latest book, “SPQR — A History of Ancient Rome,” was published in 2015 to critical and popular acclaim.

In addition, Beard is classics editor of the Times Literary Supplement and writes a blog, “A Don’s Life,” selections from which have been published in book form. “Confronting the Classics,” a collection of essays and reviews that the scholar has written over the last 20 years for the Times Literary Supplement, The London Review of Books and the New York Review of Books, was published in 2013.

She is a fellow of the British Academy, a foreign honorary member of the American Academy of Arts and Sciences, and an international member of the American Philosophical Society. In the Queen’s New Year’s Honours list for 2013, Beard was awarded an OBE for services to classical scholarship. In 2014 The Royal Academy elected her as professor of ancient literature, an honorary position first instituted in 1770, and in 2016 she was awarded the prestigious Spanish prize, The Princess of Asturias Award for Social Sciences.

Image from the poster for the Rostovtzeff Lecture

Beard, who has lectured around the world, is a regular broadcaster and commentator on radio and television on programs such as BBC Radio 4’s “In Our Time,” and she has presented television documentaries on Pompeii and Caligula as well as the acclaimed TV series “Meet the Romans” and the most recent BBC series, “Rome — Empire without Limit.”

The Rostovtzeff Lecture honors renowned historian and former Yale professor Michael I. Rostovtzeff (1870-1952), who was a world authority on Hellenistic and Roman history and wrote widely on ancient history, particularly in the field of economic history.